Passport Portraits of Yesteryear no. 39

Waiting for the frontier to re-open.
Continuing the series of passport portraits in my collection.
Peruse and wonder. 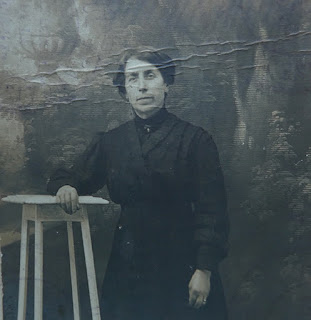 Madame Ouin is a 51 yr. old shopkeeper living in Rouen. She is French by marriage, having been born in Lerida, Spain, where a significant proportion of her relations still live. She is impatient to visit them but the Great War has been raging for four years now and neutral countries contiguous to France have closed their borders.
Anticipating the end of hostilities, Mme Ouin obtains her French passport in August 1918. It is endorsed, 'valid from the opening of the frontiers.' By the 10th. October she is on the Franco-Spanish border at Cerbère 'awaiting the reopening of the border.' But the armistice will not be signed for another month yet so, on the 11th. October she renounces her attempt to reach Spain and takes the train back to the Gare St Lazare in Paris.
By the July of 1919, she is a widow and tries again to visit her family in Spain. She is accompanied by her three daughters, Constance, Valentine and Marguerite but the problem now is that the Spanish flu is coursing through Europe, killing thousands. She has to obtain a medical certificate for herself and her daughters to confirm that they are not carrying any contagious disease. They board their train at the Gare St Lazare and at last, on 1st August 1919, they cross into Spain.
Posted by Martin Lloyd at 12:32 No comments:

Whilst walking around Derby recently in the company of my cousins we visited the market which is being renovated. They told me to look at the floor and identify the material used.


To their apparent surprise I immediately said, 'Woodblock paving'.

They were not to know that I possess several books on roadmaking dating from the 1900s onwards.

Such things interest me.

What my books taught me was that the blocks were cut across the grain so that the wood fibres stood vertically. This ensured that the block carried the weight of traffic evenly.


If the blocks had been cut along the grain then only the upper layer would be subjected to the abrasion and this would shorten the life of the paving.


My mother lived in Derby as a child and I remember her telling me that in the terrible floods of 1932, the streets which had been laid with woodblock paving lifted and floated away.

Wash your silk stockings in Swarfega! 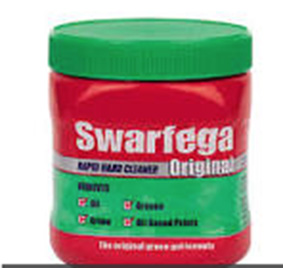 I was introduced to Swarfega industrial hand cleaner when, as a schoolboy, I worked in my holidays with steam powered traction engines. I discovered that handling carborundum paste, axle grease and gear oil provides ample opportunity to get one's hands dirty.

This was a real man's world and we teenagers espoused the dirt, the swearing and the drinking with varying degrees of success. The term 'street cred' had not been invented then but I suspect that this was what we were searching for.
'Just stick your hand in that tin of green jelly,' was the instruction and, hey presto, our hands would be cleaned.

I recently gave a talk in Belper, Derbyshire and was interested to discover that Swarfega was invented there. In 1941 a man called Williamson founded a company to manufacture a product for handwashing silk stockings. He called the company 'Deb Silkwear Protection Ltd.', the 'Deb' being an abbreviation of 'debutante'. His timing could have been better. In WW2 most silk production was turned over to manufacturing parachutes and then along came nylon stockings to displace the silk. Not to be discouraged he adapted the silk protection formula to produce an industrial hand cleaner for removing grease, oil and grit for use in the heavy engineering and motor industries. Swarfega was born.

Swarfega is still manufactured by Deb Ltd, in Derbyshire but just up the road in Denby, where the pottery comes from. I suppose that car mechanics can still wash their silk stockings in Swarfega should they so desire.
Posted by Martin Lloyd at 15:59 No comments: