Play me I'm yours in Canterbury


As part of the Canterbury Festival, ten pianos have been distributed around the city of Canterbury for anybody to play between the hours of 09.00-22.00 (to concur with local licensing laws).

It is part of a worldwide initiative on behalf of Street Pianos click here for further details and a map giving the locations of all ten instruments.

But they will only be there until the end of October so make haste to make music.

Passport Portraits of Yesteryear No. 9 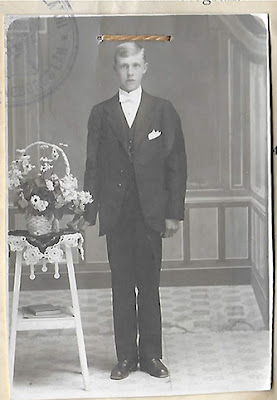 The English translation in his passport states that he is, 'travelling to abroad (except Russia) to sea.'

His religion is Lutheran and his 'Social State' is that of, 'teacher's in work in wood son.'

The photograph is sewn into the passport with one stitch of twine.
Posted by Martin Lloyd at 23:04 No comments:

The public path through my bedroom.

On our way up to Scotland we stayed two nights at the Golden Fleece Hotel at Thirsk. This is one of our favourite hotels. It is an old coaching inn, famous for hosting the Northern HighFlyer which was the express stagecoach service from Newcastle to London. The stable yard is now the car park and the stables have been converted for human accommodation. The inn itself has all the characteristics of ancient inns – crooked doors, creaking corridors, blocked up doorways and short flights of stairs everywhere. It is great! see here for details. 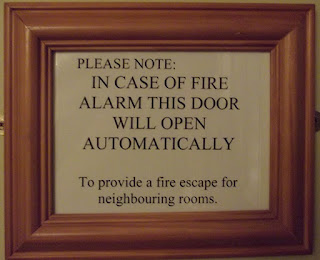 However, one little quirk made me sleep a little uneasily. Our bedroom was part of the fire escape route and, as the notice aside indicates, when the fire alarm sounds, our bedroom door would open automatically for the guests to troop through to safety.

It was a good job I remembered to pack my pyjamas.

We had nearly a full complement of cyclists on our last trip. Exploring the back lanes of the village of Preston (Preston in Kent, not the town in Lancashire) we came across these examples of industrial archeology.


Every year in June, the Steam Museum at Preston hosts the Preston Steam Rally and East Kent Show which is a two day gathering of steam powered traction engines and classic vehicles in a beautiful rustic setting near the village church. Looking across the fields in the early evening to see the steam gallopers swirling around with their haze of smoke and steam illuminated by the hundreds of electric light bulbs is a beautifully evocative sight.


But this year there is to be no show. I understand the organisers are searching for another venue.

So we cyclists had a show of our own, goggling at the traction engines, railway locomotives, portable engines, pumps and even a stern wheel paddle steamer which were patiently waiting to be repaired and restored.

We hope they can find a suitable venue for next year. It really is a show like no other.

Posted by Martin Lloyd at 17:27 No comments:

It's Autumn in Canterbury

Posted by Martin Lloyd at 17:46 No comments:

Beaconsfield and the Daily Telegraph. 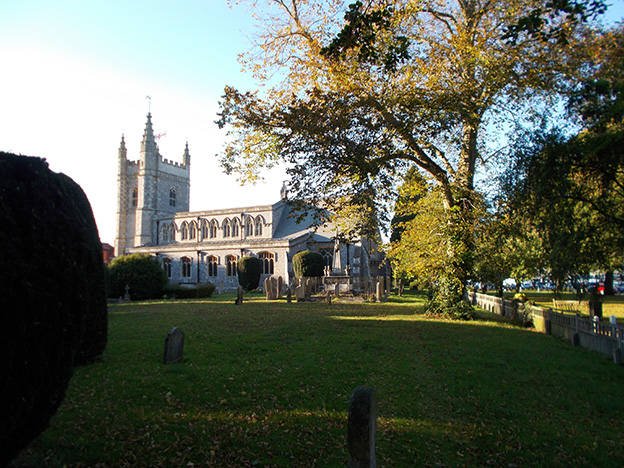 This is the church of St.Mary and All Saints in Beaconsfield, Buckinghamshire. I recently delivered a lecture in the Fitzwilliam Centre alongside it.

In the churchyard are the tombs of two members of the Levy-Lawson family, father and son, who owned and ran the Daily Telegraph in the latter part of the nineteenth and early part of the twentieth century.


The tomb of his son, Henry Lawson Webster Lawson, who died in 1933 bears the inscription:


'In his direction of the Daily Telegraph he accepted the high responsibility which the power of publicity entailed and ever maintained the high standards of the British Press.'
So now you know.
Posted by Martin Lloyd at 10:40 No comments:

Passport Portraits of Yesteryear No. 8 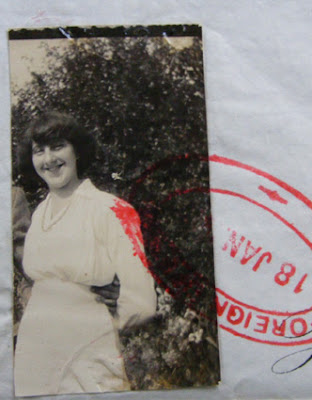 Florence Helen Varty,  a 19yr. old English girl from Borough Place, Tenterden, Kent, who went to France during the Great War in January 1915 and resided in the Madeleine district of Paris until the December of that year.

The country was in the middle of a bloody war yet life in Paris went on as normal.

Note that her picture on her British passport has been cut from a larger photograph – you can just see a portion of a man's shoulder on the left of the image.
Posted by Martin Lloyd at 23:37 No comments: