Passport Portraits of Yesteryear no. 19 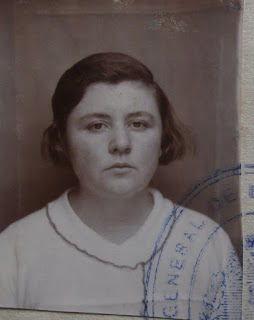 Raquel Avendano, an Argentinian girl of no stated age or description. This photograph is attached to the emergency passport that was issued to her on 5 August 1936 by the Argentine consul in Barcelona, Spain.

She looks a remarkably modern girl after these eighty years. Her age and what she was doing in Spain we can only conjecture. The passport text is sparse but what detail there is tells a dramatic story. She is instructed to 'get out of Spain by any means and by any route and then present herself to the Argentine authorities in the country of arrival.'

The civil war in Spain is just beginning.  Italian and German planes have already shipped Franco's army from Morocco to the Spanish mainland. Hitler is backing Franco, the Russians are supplying the Republicans.

The first of the International Brigade volunteers are landing in Spain as Raquel boards a ship in Barcelona on 7 August, arriving in Genoa, Italy on the following day. There the Argentine consul issues her with a visa to return home and she leaves Italy on 20 August, reaching Argentina on 4 September 1936.
Posted by Martin Lloyd at 10:24 No comments:

Looking
up
a
tall
tree
in
Sanding
Park
on
the
occasion
of
their
annual
one
day
opening.

And looking all round on the horizontal.

Posted by Martin Lloyd at 20:24 No comments:

On our way to Hassocks we stopped for a sandwich at Hurstpierpoint. Is it a village? Is it a town? Difficult to say. The main street is frozen in peristalsis with wide portions and narrow portions restricting and advancing the flow of cars, buses, delivery vans and pedestrians. And, of course, cyclists on their way to tackle Ditchling Beacon just along the ridge.

At the eastern end of the street is to be found the Players Theatre and the cinema. 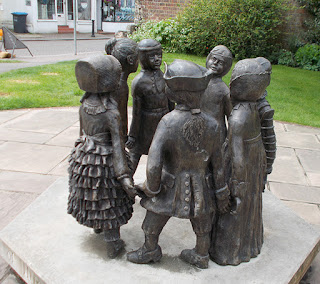 On a small green stands this sculpture. It represents children over seven centuries and commemorates the St. Lawrence Fair which was personally authorised by King Edward II in the 14th. century, to be held for one day each year, and has maintained that presence ever since. 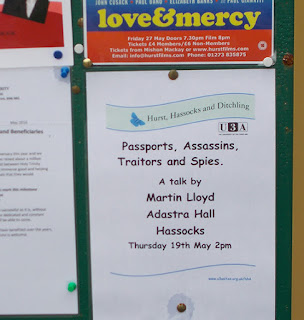 And on the public notice board was an announcement of a more ephemeral happening.
Posted by Martin Lloyd at 10:02 No comments:

Not really a Caravelle

Actually, the aeroplane at Brooklands is not really a Sud Aviation Caravelle, it is a BAC One Eleven – an aircraft designed and built at Brooklands. I was misled by the rear passenger access via an integral staircase under the tail – a characteristic which I remembered from having flown in a Caravelle.

Another aircraft which I flew in, a long time ago, was a Vickers VC10. Returning from Karachi on our way to Heathrow, the 'plane did a refuelling stop at Riyadh, picking up a number of British engineers on their way home. With great relief they busily ordered alcoholic drinks from the hostess, only to be told that due to martial law operating in Pakistan, the crew had been forbidden to break their customs bond on the alcohol which remained inaccessible in the hold. Oh the irony!

But my VC10 was not quite as luxurious as this one. Used by the royal flight of the Sultanate of Muscat and Oman, it is now in retirement at Brooklands.

I was a little concerned on looking through the inspection hatch in the toilet at the rear of the aircraft to see just how close one was sitting to the fuel pipes and engines. 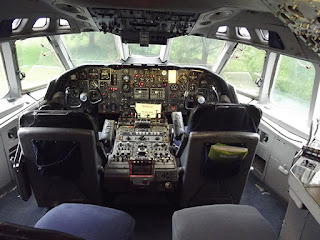 This was where the driver sat.

We went to the Motor and Aeronautical Museum at Brooklands recently. You probably know that Brooklands was the world's first purpose-built motor racing circuit. It opened in 1907, which, if you think about it, is pretty early in the history of motoring. It was renowned for its two banked curves, each rising to 29 feet at the outer edge, which enabled the cars to safely achieve high speeds. 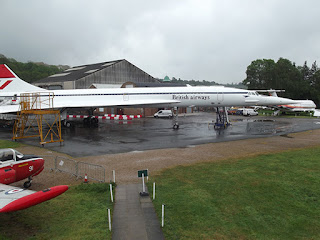 Brooklands was bought by Vickers and developed into an aviation centre, with parts of the Concorde manufactured on site.

Exhibited is a retired Concorde. 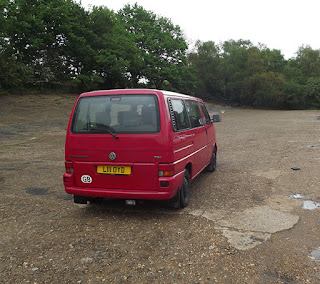 Some of the original race track still remains and at the museum they have a Caravelle aircraft.

But this is my Caravelle on the banking.

The track record stands at 143 mph.

Passport Portraits of Yesteryear no. 18 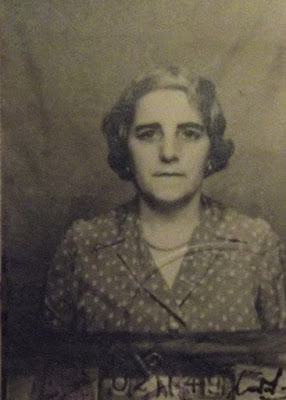 It is now February 1944 and her Indian passport which has just been issued to her in Calcutta describes her hair as 'turning grey'.

She wishes to go to England, a country which is in full preparation for the Normandy landings of D-Day.

She obtains permission from the Bengal Government and sets sail from Bombay on 4 March 1944. Sailing around the Cape of Good Hope and into the Atlantic Ocean to avoid the German submarines, she disembarks in Bristol on 24 April 1944. There, she is issued with a document unfamiliar to her - a British National Registration Card.

Welcome home!
Posted by Martin Lloyd at 23:39 No comments:

Well, we made it to Whitstable and lounged on the beach eating fish and chips and arguing over the taxonomy of the various gulls which were swooping over our heads. Whilst waiting for our fish to be fried I looked down the street and saw all these bay windows. 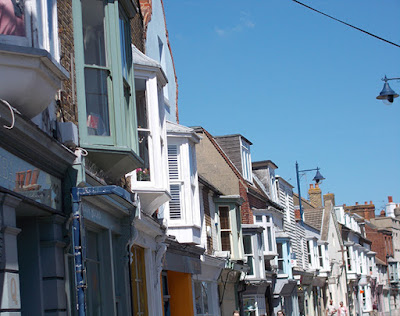 
There must be more than
10 Windows. 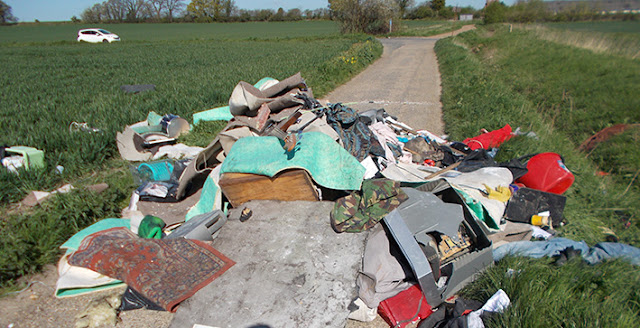 A beautiful sunny day which we chose to visit Whitstable. A gentle meander through the Kentish lanes which were aglow with sunlighted bluebells and primroses and rubbish. 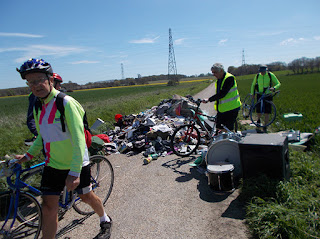 The next time you are visiting Kent and you are tempted to discard your empty crisp packet, think again.

You could empty your garden shed. 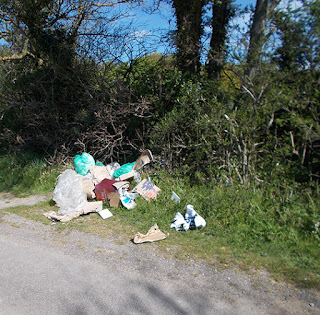 We have plenty of unspoiled country lanes just awaiting your adornment.
Posted by Martin Lloyd at 19:51 No comments:

Cranleigh in the Spring 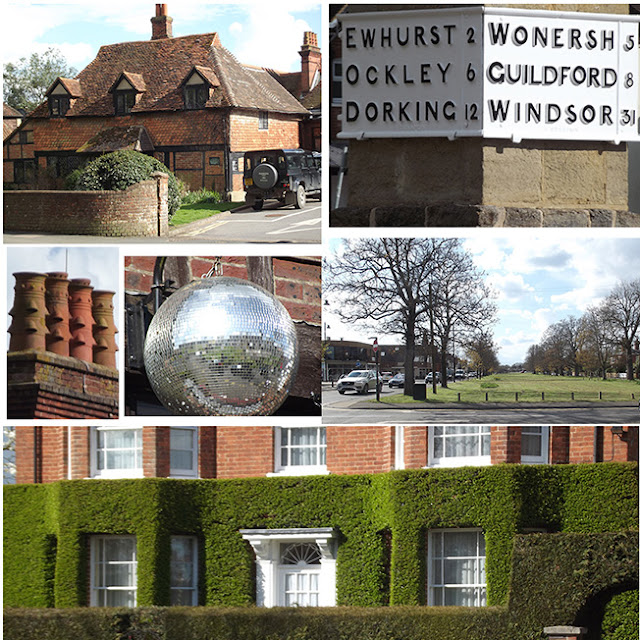 I was in Cranleigh a couple of days ago – an interesting little settlement in Surrey. I am not certain if it is a town pretending to be a village or a village posing as a town. It distinguishes itself by having the first village hospital in England (top left) established in 1859 by the local surgeon and the rector and still functioning today.
Posted by Martin Lloyd at 09:17 1 comment: