Much earlier, in Sheffield.


The hotel that we stayed in was the Royal Victoria Hotel which had been built in the mid nineteenth century as the Station Hotel for Sheffield Victoria Station.

I can remember that passenger train services from this station were withdrawn whilst I was studying in Sheffield, much to the disgust of one of the students in our digs who could reach his home in Manchester on a direct train from there.

I was surprised, forty five years later to discover that the station had disappeared almost entirely. 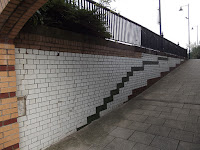 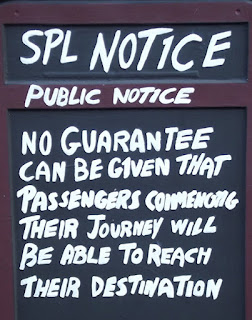 The only evidence of its existence that I could find was the stone wall running alongside the old Station Approach and this short stretch of tiling on a wall. Several reproductions of old railway artefacts have been set into the wall – a letter from Oscar Wilde written on hotel headed notepaper, a wartime restaurant menu and this passenger notice also from the 1940s.

The interior of the hotel is resplendent in the massive and palatial Victorian style – high ceilings, chandeliers, ornate ironwork and elegant plaster mouldings on the ceilings.


The stair well reminded me of one of Escher's famous optical illusion drawings. As I climbed to the upper floor I expected to find myself back on the ground floor or to be met by one of those waterfalls which ended up where it had just begun.
Posted by Martin Lloyd at 11:53 No comments:

Much later, in Sheffield.

Yesterday I delivered a lecture in the University of Sheffield – a city in which I was a mediocre student forty five years ago. Gosh, has the city changed! The 'Polo' traffic roundabout with the hole in the middle has been filled in and a new tramway now runs over it; the brewery by Ladygate whose aromatic vapour would waft me on my walking route to college is now just a shell under redevelopment and the cream buses of Sheffield Corporation have been replaced by omnibuses of every hue.

I studied in Sheffield when the steel industry was on its very last legs. Factories were closing, the city was strewn with redundant buildings and waste sites. But the legacy of steel has not been forgotten.

This is a brick mural designed by the artist Paul Waplington and completed by the Sheffield City Council Works Department in August 1986.

It is entitled, 'Steelworker' and comprises the entire end wall of a four storey building.
Posted by Martin Lloyd at 17:34 No comments:

Passport Portraits of Yesteryear No. 10 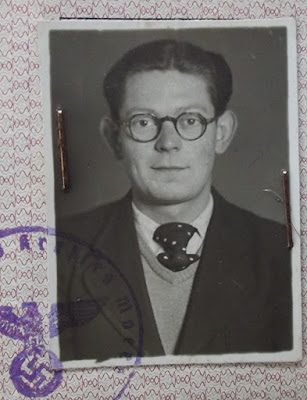 Robert Rondel, a 23 year old Frenchman working in Germany in 1943.

This is his photograph on the Alien's Passport that the German authorities issued to him to enable him to travel within Germany and abroad.

But surely, in 1943 France and Germany were at war? Yes, they were but Germany needed manpower and so recruited workers from the countries it had occupied.

Some went voluntarily, some were forced.

I wonder which category Robert Rondel fell into?
Posted by Martin Lloyd at 12:11 No comments: 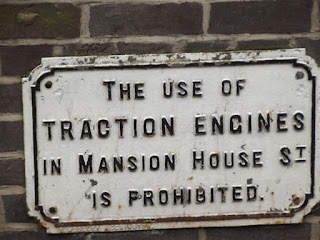 If you read my post of 11th October you will have seen the steam engines that we discovered. (Read the post here). I recently gave a talk in Newbury in Berkshire and walking around the town before the talk I saw this sign on the wall.

So those engines would not have been allowed into Mansion Street. It's reassuring to know that Newbury is keeping its signage up to date.
Posted by Martin Lloyd at 18:23 1 comment:

'Smart' is the new stupid.

George Orwell, in his predictive novel Nineteen Eighty Four, published in 1949, introduced the reader to a world in which the government, amongst other activities, changed the meaning of the language to suit its ends.

If you have not yet read it, do so now and then ponder how much the dystopian world he described as fiction has become fact today and marvel at how far-seeing he was.

The book came to mind the other day as I sat in a traffic jam on the M25. When the motorway system was started, both carriageways had a hard shoulder upon which you were forbidden to drive unless in distress. It prevented broken-down vehicles from obstructing the motorway and permitted the emergency services to access any incident as quickly as possible. Now what could be more sensible than that?

Well, apparently, doing away altogether with this safety lane permits the capacity of the road to be increased by 33%.

Q: What happens if a vehicle breaks down?
A: It can coast to one of the emergency lay-bys which have been constructed at half mile intervals.

Q: Where are these vehicles which can coast half a mile with a seized engine? Surely they will be hit by other vehicles?
A: No they won't because we have installed an electronic signalling system which will direct the traffic away from the obstruction. 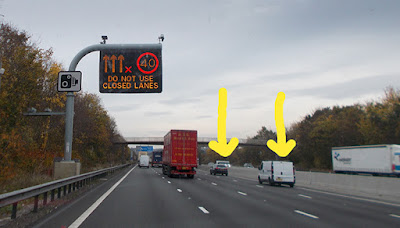 This is what actually happens. 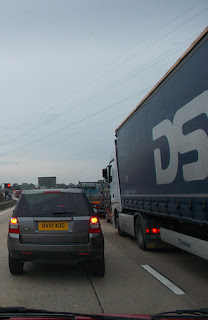 The drivers who are exceeding the speed limit of 70mph are obviously in a hurry and so accelerate down the closed lane which the careful drivers have vacated for them.

When they reach the obstruction they then push in to the lane on their left and we all stop.

Five years after the opening of the M1, the average speed in the left lane, next to the emergency hard shoulder, was 40mph with 98% of all vehicles travelling at less than 70mph. The speed in the left lane is now 70mph. Motorways which are being converted to this monstrously idiotic arrangement have been officially named:

Posted by Martin Lloyd at 21:19 No comments:

Does the Queen ride the Tube?

I went up to London yesterday to 'take part' in a live television programme on BBC 2 called,  Daily Politics. The taking part consisted of me being wheeled on at the end of the programme to be asked stupid questions which they had told me they would not ask on a subject of which fell outside my sphere of expertise. But who cares? Nobody watches the programme. Even the floor manager, viewing the monitor with me before I went on was muttering, 'boring, boring, stop talking, shut them up'. I am so glad I do not own a television.

However, that apart, my day in London meant that I came into contact with the rapid transit system of the city. The first incident which amused me was that the computer controlled driverless train system, known as the Docklands Light Railway, was not operating because of 'industrial action'. Has the right to strike been written into the computers' software?

And the other was the recorded announcements in the tube trains which helpfully announce where to alight, such as, 'alight here for the British Museum'. When we arrived at Green Park, the recorded voice said, 'alight here for Buckingham Palace'. I had visions of Her Majesty nudging Prince Philip in the ribs and saying, 'Come on Phil, this is our stop.'
Posted by Martin Lloyd at 09:00 No comments:

Foggy November – cycling off the edge of the world.


I did not believe the weather forecast for one minute when it predicted that the mist would lift at 11 am and all would be sunshine. I have come to realise that the weather in East Kent is always at least half a day behind the forecast. 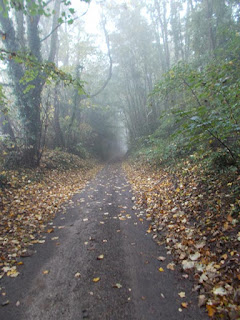 The autumn leaves were falling from black, dank trees which dripped heavy drops of condensed mist onto me as I cycled below.

I was out for five hours and never saw further than about a hundred yards in front of me.

But then, that is what the weather can be like in November. I am not complaining – I am a cyclist.