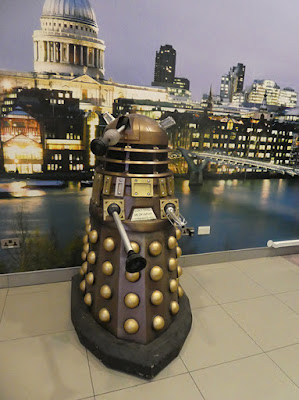 When I arrived at BBC Broadcasting House for my recent interview, apart from the security search, baggage scan and the issue of a pass, I was met by a Dalek. This was the first one that I had seen in the flesh and I discovered that they are bronze coloured. Well I never knew that. I had always thought that they were a silvery colour.

When Dr. Who came on television in the early 1960s the picture was in black and white and by the time colour TV had arrived, I had moved on (grown up) as it were.

You live and learn don't you?
Posted by Martin Lloyd at 23:31 No comments:

Yesterday evening I was called in precipitously to BBC Broadcasting House to be interviewed live on BBC TV News 24 Hours about the De La Rue/Gemalto controversy.


The problem was that De la Rue had submitted a bid for the tender to print the next British (and blue) passport and had been outbid by a Franco-Dutch company called Gemalto. The latter had succeeded by the simple procedure of offering to do it for less money than the other bidders. De la Rue are incensed that the British passport should be manufactured abroad and I was called in to opine about it. Which I did.

I timidly suggest that this is how the business of tendering actually works. The bidder who can satisfy the requirements of the customer at the lowest price will win the contract; as would appear to be the case here. It is a little hypocritical of De la Rue to complain, given that when they won the contract to print the British blue passport in 1921, they did it by undercutting the current supplier, Harrisons & Co. Ironically, once they had the job they found that they could not fulfil it unless they ordered a Chambon roll (an expensive piece of printing equipment) from? Guess which country? Yes, France.

And this morning, BBC Tees. local radio, had me on just after their MP had been complaining that the British passport should be made here, in the De la Rue factory in his Gateshead constituency. A British passport should be made in Britain. I pointed out that De la Rue made passports for over forty foreign countries. Did he now want those countries to withdraw their custom from Gateshead and make their own passports?

The Rising Sun in Watford.

We recently stayed at the Premier Inn in Croxley near Watford. It is called the 'Rising Sun'.  I remember riding with my mother on the top deck of the London Transport bus to Watford as a pre-school child. Where the road crossed the canal there existed two or three quite distinct hump backed bridges which I referred to as the 'water hills', presumably not having 'bridge' in my vocabulary at that age.

Opposite the hotel I noticed this clock tower and I remembered the Sun Printing Company which must have occupied a site near here. At one time the Sun Engraving Co. was the largest engraving and rotogravure plant in the world. When the Sunday Times launched their 'colour supplement' it was the Sun who printed it.

I went for a stroll around the block and found a couple of signs suggesting that the hotel and associated shops had been built on the site of the Sun Printing Works. 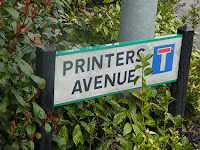 A fascinating history of the Sun Engraving and related companies can be found by clicking here.