What is missing in this library? 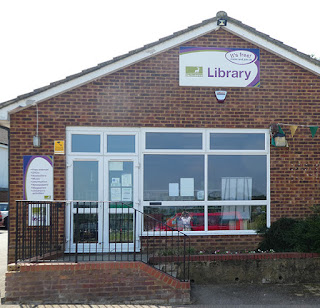 My love of reading and, eventually, writing was fuelled by my weekly visits to the public lending library. I chose my three books on Saturday morning and by Saturday afternoon I would have read the first book. Each child was allowed three library tickets but I discovered a subterfuge by which I acquired nine and the librarians did not see the reason to question my allocation. Perhaps they were being complaisant for the sake of education.

Public libraries are a goldmine which should be explored by all: children and adults alike. To be able to pick a book from a shelf, sit down and read it at leisure should be one of this frantic world's most treasured activities. To have one's imagination triggered by the words of another is mentally stimulating and intellectually satisfying – you don't have to peer at a flickering screen or push buttons or stick things in your ears. You just sit there quietly and live in the world of your imagination. And it is BOOKS that provide the material. 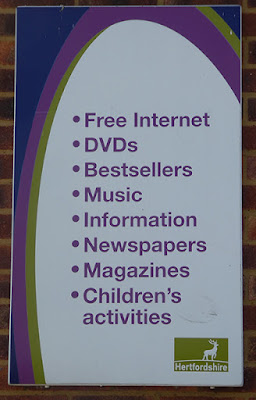 I recently gave a talk at Wheathampstead in the Memorial Hall next to the library. A placard on the wall declared, 'come and join us, it's free'.

By the door, this notice enticed you with what the library was offering you.

WHERE ARE THE BOOKS?
Posted by Martin Lloyd at 09:04 No comments: 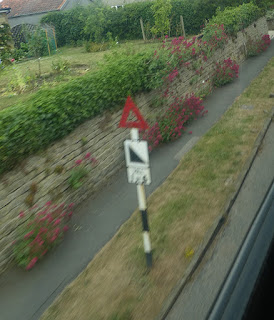 A blurred photograph (left) which I snatched by fortune from the top deck of our bus on its way to Scarborough as it passed through the village of Hutton Buscel two days ago.

For those of you too young to remember, this was the standard warning sign used in Britain until the recommendations of the Worboys Report were adopted.

It indicates that you are approaching a steep descent on a gradient of 1 in 5. (20% in the new language). 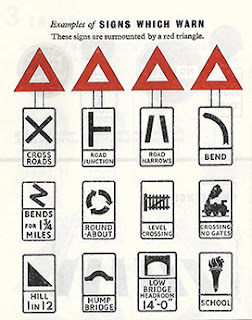 My 1954 copy of The Highway Code, price one penny from Her Majesty's Stationery Office, illustrates quite a range of signs which were in use at the time. The hollow red triangle which surmounts the post was introduced by the Motor Car Act 1903 and was originally used on its own to indicate a hazard or a precipitous descent. The addition of the pictorial boards was a later development. 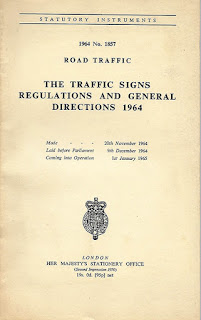 But the point is, under the 1964 Statutory Instrument (left) the newer 'Continental' style signs were supposed to have been introduced on 1st January 1965 and the old signs replaced.

Fifty three years later, the sign is still there. Does time run differently in Yorkshire?
Posted by Martin Lloyd at 23:35 No comments:

I went across to Calais for lunch with some friends a few days ago. Passing through Eastern Docks at Dover twenty years after I had finished working there was a mind rattling experience. For all the time that I was there the port had been a building site. If a building was not being erected it was being demolished. Now, the place is almost empty. Where once you would have arrived at the front of the port under an enormous illuminated DOVER HARBOUR BOARD sign, checked your ticket at one of the ticket booths, if you were a hovercraft passenger your vehicle would have been directed to the first floor parking area, if not you continued under the canopy to the enormous Customs and Immigration shed; or you might, before continuing through, have parked up to visit the passenger services building attached to No1 Control Building, in order to return your rental car, exchange money at the NatWest Bank or amend your ticket at the ferry company's desk; now there was... nothing. It was just an expanse of concrete and tarmac with different coloured lines painted on it. It seems that the entire port has now been demolished.


Well not quite. Some buildings have been replaced by newer versions but many have just disappeared so I was surprised on disembarking in the evening to realise that the original Dover Hoverport buildings were still standing. The hovercraft moved across to Dover West in 1978 because they needed more room than was available at the East and their terminal building and maintenance area was converted for use by Kent Police. Originally, the glazed section in the middle of the building was a glass roofed area where the hovercraft would be run in for repairs.

Ironically, the newer Hoverport in Western Docks has already been demolished.
Posted by Martin Lloyd at 21:03 No comments: 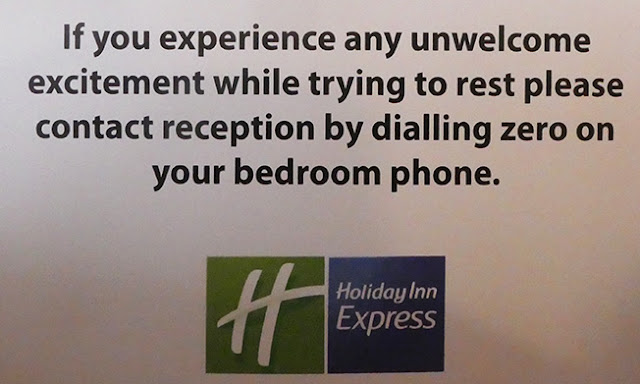 I am uncertain what the Holiday Inn Express in Peterborough was referring to with this notice in my hotel room and even more nonplussed as to what they thought the employees on reception could do to relieve this unwelcome nocturnal excitement should I contact them.
The mind boggles.
Posted by Martin Lloyd at 21:51 No comments: