It's technology that slows down passport control.

According to a recent article in The Times, now that the new UK passport will carry the photograph of the bearer at the front it will remove, 'that quirk that used to allow us to stand out from the rest of the world,' and which, apparently, 'baffled immigration officials in America and many other countries.'

Avoiding the temptation to speculate on what would not baffle an American immigration official, I find it misleading and rather insulting to imply that passport officials waste time trying to find their way around passports. The passports of many countries in the Middle and Far East open 'at the back' and have done so for decades. Passport officials know this and work accordingly. What slows down passport control is not 'back to front passports' but the application of technology to the process.

A British family of five travelling on their joint passport could be checked by a British immigration officer in about five seconds. Now each family member must hold their own passport -- this earns more money for the government. The computer takes eighteen seconds to verify the microchip. That family of five now wait for ninety seconds and so does everybody in the queue behind them.

I've said it before and I shall no doubt have cause to say it again: we are teaching machines to do badly what a human can do so well.
Posted by Martin Lloyd at 21:55 No comments:

Rue Amelie is now in Italy 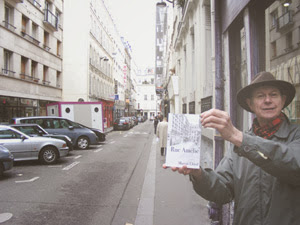 When visiting Paris earlier this year with Pauline and Geoff I took them to Rue Amelie, the street in which my eponymous popular thriller is set, and Geoff took a photograph of me displaying a copy of the book which demonstrated how the cover art was an accurate representation of the actual street.

A few weeks ago they holidayed in Italy and what did they find in the hotel bookshelf? - a copy of Rue Amelie. So here is Pauline, reprising the earlier tableau.

And still it goes on. Look at my post of 12th April 2014 and you will see another happy reader in the Rue Amelie.

Posted by Martin Lloyd at 20:01 No comments:

Before the Australian states federated, each state decided its own immigration policy and issued passports. Even after federation in 1901 this practice continued until the outbreak of the Great War at which point passport issue became the responsibility of the Governor General.

Australian passports bore
the legend, 'British Passport', on their covers and the holder's nationality was described as, British Subject'.

As the country became more confident in itself, this became, 'Australian Citizen and a British Subject'. In 1967 Australia decided to remove the 'British' from their passports altogether. I can quite understand the wish of a country to affirm its own identity but have they now gone too far by expunging Great Britain entirely from their cognizance?

When I applied for my Australian visa recently, I trawled through the list of countries from which Australia declared that it would be delighted to receive visitors and was nonplussed not to be able to find mine. Every other country in the world was listed but not the United Kingdom. Nor was it described as, 'Great Britain'. I eventually discovered that my country is called, 'British Citizen'.
Posted by Martin Lloyd at 23:32 No comments: