Passport Portraits of Yesteryear no. 38

STO – Working for the enemy.
Continuing the series of passport portraits in my collection.
Peruse and wonder. 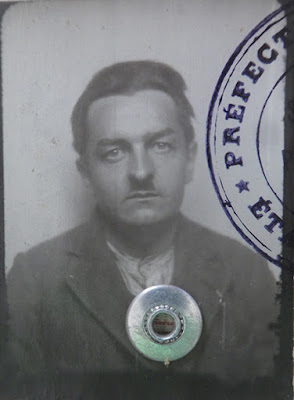 Jean Pontet is a 29 yr. old Frenchman from Lyon. It is April 1943 and France has been occupied by the Germans for the last three years. By the armistice of June 1940, France was divided into an occupied zone in the north and an unoccupied zone in the south. When in 1943 the allies invaded North Africa the Germans responded by crossing the line southwards and occupying the remainder of France. A few weeks before this passport was issued, they cancelled the Demarcation Line.

The Germans wanted civilian manpower to run their factories. They had tried to recruit Frenchmen to this end, enticing them with the promise of greater food rations and high wages. They were not very successful in this endeavour and so introduced the Service du Travail Obligatoire – STO. It was a compulsory work force to be shipped off to work for the Germans. Jean Pontet was caught up in this. He was issued a gratis French passport by the new Etat Français endorsed  'this passport is issued for Germany.' It contained no written physical description of him, merely his photograph and a French visa allowing him to travel in and out until September 1945. He was sent to Linz in Austria where the Germans were assembling Tiger tanks.
He does not look very enthusiastic on his photograph.
Posted by Martin Lloyd at 18:21 No comments:

How do you put these three together?
By staying at the Redcliffe Hotel in Paignton.
On our second day, having a little time to explore this extraordinary hotel, I asked at the reception desk why the hotel had named a room 'The Dick Francis Suite'. I was astonished to learn that this famous novelist had stayed at the hotel for fifty seven consecutive years, usually in August. Even when he lived in the USA and later Grand Cayman, the Francis extended family would gather in Redcliffe Towers for their annual get together.

And then you look at the architecture and you begin to wonder – where did it come from? What were the inspirations? We are accustomed to the flamboyance of British Victorian seaside architecture... but this? A Maltese Cross or two, some seahorses, an Italianate style with Indian references. What a mixture.

The hotel was originally built in 1856 as a private house, Redcliffe Towers, on a prominence overlooking Paignton in Devon. The designer and owner was a retired surveyor of the East India Company, Robert Smith, and the residence he erected reflected his employment and world travels. It was converted to a hotel nearly fifty years later.

For a full appreciation and explanation of this remarkable site I can do no better than refer you to the website East India Company at Home which will, I am sure, make you marvel.

And for the full experience, go and stay in the hotel. The staff are attentive and friendly and the hotel has direct access to the sandy beach.