Passing through Derby recently I was surprised to see this building in the mature stage of demolition.

It is Derby Royal Infirmary.

I understand that the site will be used for housing.


The Royal Infirmary was built on the site of a previous Derby hospital which was demolished in the late nineteenth century after a report blamed the design and layout of the buildings for a devastating outbreak of typhoid in the hospital.

Hopefully the main entrance building will be saved and adapted for another purpose. 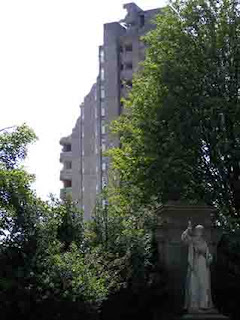 But I think that even Florence Nightingale, whose statue we see at the bottom of this picture, would not cry over the demolition of the tower block nurses' home that is going on behind her. 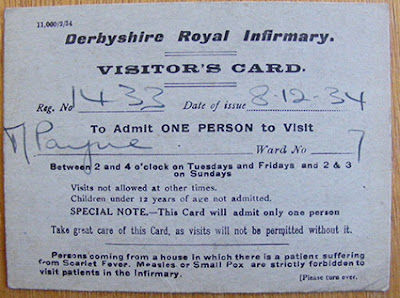 My maternal grandmother was a patient at the Royal Infirmary in 1934.
This is the pass given to my
grandfather so that he could visit her. 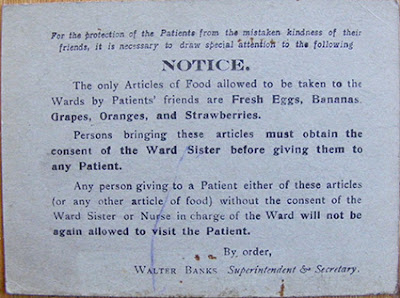 Posted by Martin Lloyd at 12:54 No comments:

No, it is not a firm of estate agents. I cycled to Sandwich today with MyMateJohn and on the way back we met these three Dutch cyclists who were looking for the camp site so we guided them from Littlebourne to the Canterbury camp site. They had toured along the South Coast, circumnavigated the Isle of Wight and were now on their way back to the Netherlands. Look at the amount of baggage on their bikes – and they still left me standing on the hills.
Don't foreigners have funny names?

We went for a cycle ride on the Monsal Trail – a picturesque abandoned railway line which runs through Bakewell in the Peak District. Today is the start of the 'Eroica Britannia' meeting whereby thousands of cyclists take part in a three-day festival, ending on Sunday with a ride on the trail. The only stipulation is that in order to take part you must be riding a bicycle of pre-1987 date and be dressed accordingly! For more information on the Eroica Britannia, click here

In the meantime, here is a field of buttercups alongside the track. 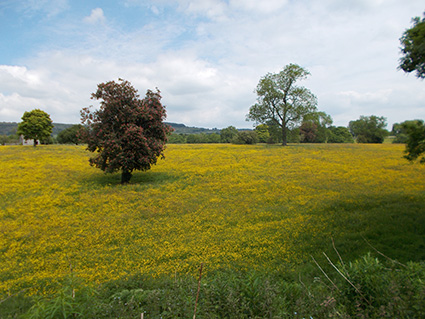 Posted by Martin Lloyd at 09:41 No comments:


This is it, folks. the actual car park in Leicester under which the remains of King Richard III were discovered in 2012. The small concrete building covers the site of the discovery.

King Richard was reburied in Leicester Cathedral in March 2015.

Wandering around the city, I wondered where all the students were. Surely they could not have finished for the term – we are only in the middle of June? Then I saw this sign and realised that they must all have been locked up somewhere.

Leicester market – don't miss it.
Posted by Martin Lloyd at 10:02 No comments:

The Blue Boar at Watford Gap

Do you remember it? Britain's first motorway service area at Watford Gap on the M1 and it was locally owned, rather than run by a major company. The owners ran a petrol filling station on the nearby A5 road and were given the chance of running the Watford Gap service station as compensation for the loss of trade that they would suffer when the motorway was opened.
This loss of trade was serious. We used to travel up the A5 to visit cousins in Derby and one of our landmarks was to look out for a transport cafe which had 'May's Cafe' painted on the roof tiles. Within a very short time of the motorway opening, May's Cafe closed its doors.
We stopped at Watford Gap services on our way up to Leicester today. It is no longer owned by Blue Boar but still displays that reassuring run-down and decayed look that it always seems to have done. Perhaps my memory is coloured by the times I got stuck there when hitch-hiking up the M1. On one momentous journey two of us ended up at Watford Gap, going northwards, at 2 a.m. and there we stuck till 6 a.m. In the late 1960s, at two in the morning you would see a truck or car perhaps once every four or five minutes.
Inside the services I saw displayed on the wall the above four photographs which were taken by a photographer called Martin Parr during the 1980s.

It brought it all back.
If you want to know more about Watford Gap or indeed any of Britain's motorway services, you should click here
Posted by Martin Lloyd at 23:01 No comments: 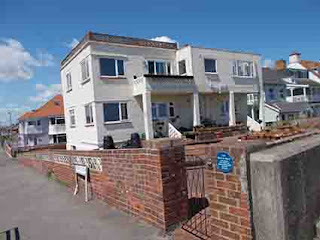 Went for a lovely ride in the sunshine today. I saw this house on the sea front at Deal. 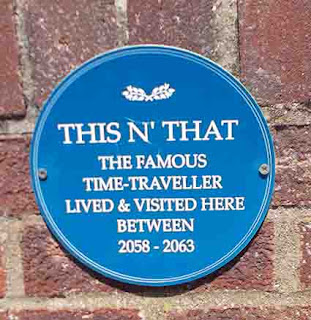 Then I read the blue plaque on the wall.

Perhaps I have had too much sun.
Posted by Martin Lloyd at 22:47 No comments: