Do you remember my blog of 4 November 2014?  Click here for a reminder.

The graffiti which was removed and transported to the USA for sale became the subject of an ownership dispute. It would appear that Dreamland Leisure, the company which occupied the host building and which effected the removal of the  painting, were only leaseholders. The High Court in London decided recently that they had no right to cut out the Banksy as they did not own the walls. Creative Foundation, an organisation dedicated to the artistic promotion of Folkestone, stepped in quickly and purchased the rights to the wall and secured the judgment in London last month.

So... will Banksy be coming back to Folkestone?


I can only suggest you watch this space.
Posted by Martin Lloyd at 19:28 No comments:

The Squirrel is after my nuts!

This is my Kentish Cobnut tree, fully loaded with nuts. Every year I prune it and train it and tend to it and some years it yields nuts and other years it seems to take a rest.

This year I have a bumper crop. Some of the clusters have eleven nuts on them. This munificence, welcome though it is, comes not without its problem in the shape of the squirrel. This animal can strip the tree in a couple of days.


As soon as I see a nut on the lawn which has been cracked open, I know that the squirrel is around and it is time to call in the grandchildren whose task it usually is to pick the nuts. Three days ago I came home to find about a dozen nutshells scattered around under the tree. Panic. No time to call up the team; I rescheduled the rest of my day and stripped the tree of its harvest.

This year I beat the squirrel!

I brought the nuts indoors and spread them on the floor of my hallway to allow them to ripen.

One day in the future when there is a good long programme being broadcast on the radio, I will sit down and crack them and then roast them.


In the meantime, the squirrel is methodically collecting the nuts that I have missed and is burying them around my garden.

Posted by Martin Lloyd at 23:14 No comments: 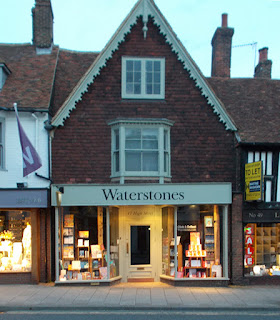 This is the Waterstone's bookshop in Tenterden, Kent. 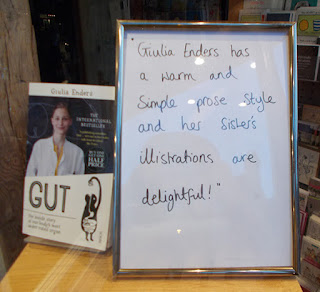 And this is the notice in their window.

The Gates of Bedlam

The word, 'bedlam' in English is used to describe a scene of absolute uproar, chaos and confusion, usually linked with madness. It comes from a corruption of  the word, 'Bethlehem', for the Bethlehem Hospital in London was known as far back as the fifteenth century as an asylum for incarceration of the insane. Its successor today is the Bethlehem Psychiatric Hospital in Bromley and claims to be Europe's first and oldest hospital for the treatment of the insane. Thankfully, over the centuries this 'treatment' has become the caring management of the NHS rather than the manacles and restraints which characterised its early days. 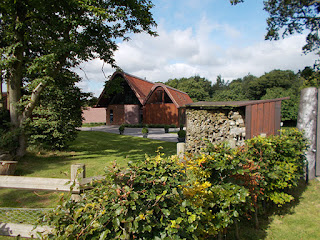 Cycling along one of the back lanes in my area of Kent I came across his modern house of striking design.

And the owner has called the house, 'Bedlam.'

It was the gates of Bedlam which first caught my attention. 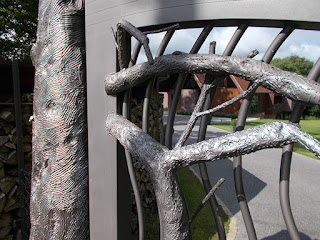 They are sculpted in metal but imitate an organic growth of trees and branches.

However, despite the name of the property, I could not imagine a more tranquil spot.
Posted by Martin Lloyd at 09:53 No comments:

Passport Portraits of Yesteryear no.7 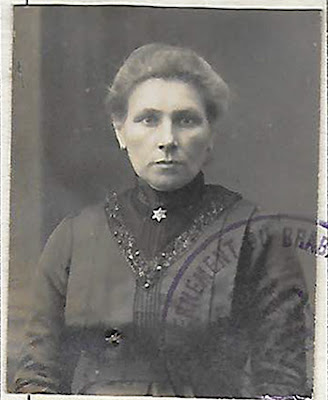 Mademoiselle Sidonie Vanderleeenen, a 43 yr. old Belgian farm worker, travelling to France in 1920.
Posted by Martin Lloyd at 15:39 No comments:

Wednesday was our monthly cycle ride and the month being September this meant that we were on our annual fruit picking ride. Not for us the organised tramp around a fruit orchard – we pick our fruit where it grows wild in the hedgerows of Kent.

Parts of the ride are off-road such as this wander along the levee at Conyer Creek.
At low tide all one sees is mud. The creek is a short tidal branch of the Swale and the Swale is the channel which separates the Isle of Sheppey from the mainland of Kent, and the Isle of Sheppey sits at the mouth of the River Medway where it enters the River Thames.


All this area has historically been a fruit growing region and although in some places the orchards have been grubbed out, the fruit trees spread into the hedgerows where they have been left to blossom untouched.

After the lunch stop, having picked damsons and plums, we made our way to our favourite damson hedge. En route we came across these tractor enthusiasts playing with their fifty year old Massey Ferguson tractors.


We arrived home just before the cloud burst. My harvest amounted to 20lbs damsons, 2lbs plums, 4lbs of pears and 3lbs of golden cherry plums.

For those readers not familiar with the English avoirdupois measurements, the term 'lbs' is an abbreviation for 'pounds' and a pound is composed of sixteen ounces. The metric equivalent of the pound is roughly 454 grams.

To read more about the Immigration Service cyclists, click here
Posted by Martin Lloyd at 21:25 No comments: