Only six more days to Christmas 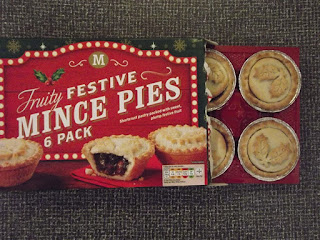 After the conventional human celebration of Christmas comes the birds' celebration.  You perhaps are unaware of this phenomenon.

Although I spurn the human festivities, partly for the commercialism of it all and partly the rank hypocrisy, I embrace totally and without restraint the festival as enjoyed by our feathered friends.

Consider these mince pies for example. On sale at six for one pound in Morrison's before Christmas, they remain unsold, possibly because they are unsuitable for refined palates. Or humans. But after Christmas, they are reduced to 25p a box and I go and buy a stack of them.

The birds love them and the sugar, pastry and fruit helps tide the little fellows over until the weather improves.

I have just started the last box birds, so there's only six more days left to Christmas.
Posted by Martin Lloyd at 17:01 No comments: 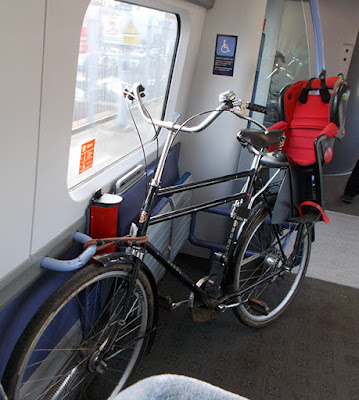 Seen on the train to London today, this superb example of a Dutch bicycle – double parallel crossbar, hub gears with integral hub brake, front hub brake and, of course, the obligatory child seat.

Manufactured by the Dutch company Burco, probably in the 1970s.

What a superbly comfortable and sturdy-looking machine it is. 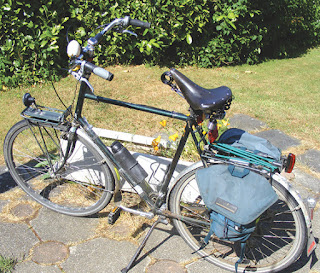 Nearly as good as the bicycle that I had built for me by Mercian twenty years ago.
Posted by Martin Lloyd at 23:44 No comments:

Passport Portraits of Yesteryear No. 13 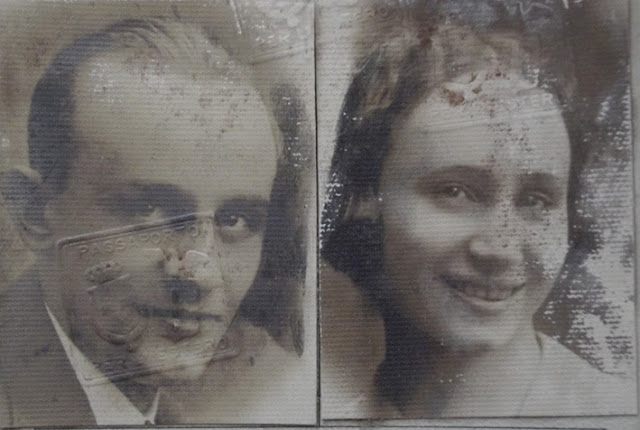 Basilio Bisuda and his wife, Elena. It is 1931 and this Italian couple with their two children have settled in Cluj, Romania. The city of Cluj, capital of Transylvania, was part of the Austro-Hungarian Empire in the 19th Century when it was called Klausenberg. In 1931 it still has a powerful Hungarian majority population dominating the lives of the indigenous Romanians.

Basilio and his family travel to Milan in Italy for Christmas 1938, returning to Cluj to take up their residence again in 1939. And when Mussolini joins Hitler in his enterprise, in 1940 the two dictators cede Cluj and Transylvania to Hungary and it becomes Klausenberg once again.
Posted by Martin Lloyd at 16:19 No comments:

NOT the life and times of an Immigration Officer

Having written what has proved to be a very popular account of life in the UK Immigration Service, entitled, Neither Civil nor Servant – twenty four years in the Immigration Service (read the first chapter here) I was interested to discover on e-bay the volume herewith illustrated. 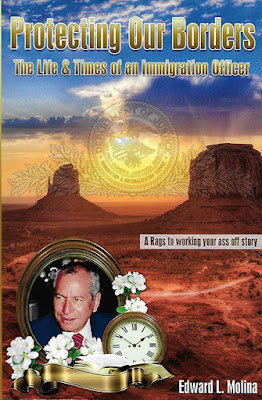 Protecting our Borders.
The Life and Times of an Immigration Officer.

The author, Edward Molina, joined the US Immigration Service in 1955 and had, I supposed, written an account of his work in that department.

I was sorely misled.

The 124 page booklet comprises nineteen chapters. He joins the Service in chapter sixteen, covering his twenty nine year career in about thirty of the following pages.

What a wasted opportunity.

What a waste of my money.
Posted by Martin Lloyd at 22:45 No comments:


Just as I was taking this photograph, the ship decided to leave the berth, thus blurring all the images. Isn't that just the way of things?

And then we had a gale force 8 in the Bay of Biscay. Not unusual weather for December of course.


But Spain put on a show for us as we left Santander.  Perhaps it was feeling guilty about the weather on our outward journey.

Posted by Martin Lloyd at 23:40 No comments:

Passport Portraits of Yesteryear No. 12

Mr Robert Stevenson, a planter, and his wife, May. He, born in India; she, born in Manchester UK. These are their photographs on their Straits Settlement passport which they used in 1917 to visit her family in Manchester. In this wartime city they were issued with two cards by the Manchester Food Control Committee. In 1919, Mr Stevenson and his four months pregnant wife left Singapore again, travelling via Marseille to the UK where in February 1920 May gave birth to their first child, Robert Radford. Five months later the new family returned via Burma to Singapore.
Posted by Martin Lloyd at 17:44 No comments: