Signal lights to control the motor traffic at road junctions were introduced into Britain from the USA in the 1920s. They were originally called 'robots' and indeed, I believe that in South Africa the current Afrikaans word for traffic light still is 'robot'. Correct me if I am wrong.


The sequence of: Red, red and amber, green, amber, red was controlled on a strictly timed basis – there existed no facility to detect vehicles waiting. The lights changed according to a pre-set sequence regardless of volume and direction of traffic. This led to a great deal of frustration whilst drivers sat at a red light, viewing an empty crossroads and this, no doubt encouraged drivers to 'jump the lights'.


After the second world war, this problem of empty crossroads and waiting traffic was addressed by the installation of vehicle detection systems at all of the 5,500 traffic lights in Great Britain.  At the approach to each set of lights a pneumatic pad was set into the carriageway. The weight of a vehicle crossing it closed an electric switch and thus influenced the sequence of lights. At the green light, if no vehicle crossed the pad for the space of twelve seconds, the lights changed to red. By the late 1960s, poor maintenance of the two systems used (GEC and Plessey) meant that 50% of the traffic lights in London had reverted automatically to the default of the pre-set timed sequence. A new solution was needed and thus the induction loop system that we use today was brought in. 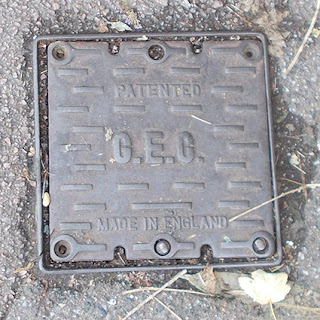 Visiting Folkestone today, I noticed in the pavement next to the induction loops, a metal utilities access cover.


This was all that was left of the electro-pneumatic switchgear which formerly had controlled the detector pad for the traffic lights.

However, on the other side of the junction, the disused pneumatic pad could still be seen in the carriageway.