The Italian Job in Turin.


Thanks to the faulty map illustrated on the previous blog we walked about two kilometres more than we needed in order to find the Museo Nazionale dell'Automobile. However, all was not a catastrophe because I recognised the venue that we were incorrectly directed to as the former Olympic skating rink on the roof of which the three Minis in the film The Italian Job had driven to escape from the Italian police. 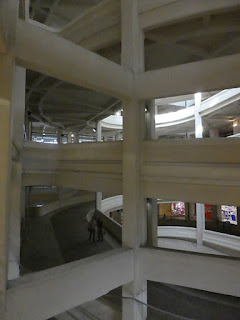 On leaving the museum we disregarded the map and made our own way back to the Lingotto metro station. There we discovered the former Fiat motor factory which has now been turned into a shopping centre. As the cars were assembled they made their way to the top of the factory and out onto the roof which was constructed as an oval test track. The three Minis in the film also raced around here. We could not reach the roof but at one end of the long shopping corridor we found the ramp up which the cars were driven.